Electric technologies offer unique benefits for improving the energy efficiency and reducing the emissions of commercial off-road construction equipment. Construction machines often make repetitive movements, allowing for energy recovery and storage. As they are often used in urban centers, criteria emissions can be a concern, and some international cities have proposed banning diesel engines.

Electrification of construction equipment has begun, with the transition first being seen in two niche sectors of the market: compact rolling equipment such as mini-excavators and skid steers, where current battery technology is most suited; and stationary material handlers, which can be tethered to shore power.

The CCDP is interested in making grants for the purchase of all-electric construction equipment. Unfortunately we are unable to fund hybrid-electric or “dual-power” machines as they do not offer large enough reductions in diesel emissions.

For details on the Colorado Clean Diesel Program’s funding for electric construction equipment, see this recording of a Sept. 30, 2021 webinar:

Excavators and other mobile equipment 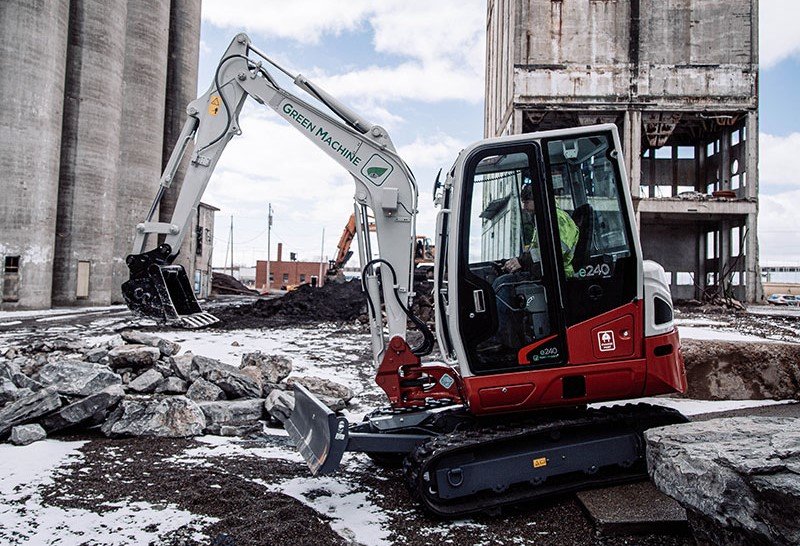 All-electric construction machines are powered entirely by electricity, which in most cases is stored in an onboard lithium-ion battery pack. An electric motor or motors propel the machine and run the hydraulics. The equipment is fully mobile, but run time is limited and the battery must be recharged by being plugged in when not in use.

Electric machines provide the same or better performance as their diesel counterparts, while costing significantly less to operate – the electricity to run them costs about 50% less than diesel, and maintenance costs are up to 70% less, thanks to fewer mechanical parts. This can pay back the 30-50% higher purchase price in about five years (and CCDP grant funding will further sweeten the ROI).

All-electric equipment delivers a couple of other compelling advantages – reduced emissions and quieter operation – that make it ideal for work in confined spaces or at sensitive job sites such as hospitals or schools. For this reason, and because of the current cost of batteries, manufacturers are initially focusing on compact machines that are designed for indoor use. Equipment rental companies may be particularly interested in adding these machines to their inventory.

The past year has seen a number of new product launches and prototype announcements in this space. Volvo and JCB are the big dogs developing and integrating their own electric technologies in-house. Other OEMs like Bobcat, Case and Komatsu are partnering with electric technology suppliers to retrofit existing diesel machines. Additionally, specialty firms like Green Machine, Wacker Neuson, Kato and Kovaco have recently brought out electric models. While currently available production models are all at the small end, we should see many more, in larger size classes, coming on the market in the next two to three years.

Note: Applicants seeking funding for any all-electric equipment must demonstrate that adequate electrical infrastructure to charge it exists or will exist on site. This infrastructure is also eligible for grant funding from the CCDP.

Mini excavators are leading the way in the electrification of construction equipment, with several OEMs vying for a share of this niche market. Green Machine has the biggest model currently available, its 4-ton e240, which can put out 17kW (about 24 hp) continuously and has a battery with a respectable 56kWh capacity. Volvo’s 3-ton ECR25 has a similar amount of power. Others from Bobcat, JCB, Wacker Neuson and Kato-CES are in the 1-2 ton range. They typically come in “zero-tail” configurations to allow for work in confined spaces.

Volvo Gets Technicians Up to Speed on Electric Excavator
Equipment World, Apr 5, 2021

When rental company Loxom purchased 18 Volvo ECR25 electric excavators, one of the immediate questions became how to best maintain them. (more…)

Battery packs are typically sized to power the machine for 6-8 hours under a normal or light load, but heavier work may bring that down to as little as 4 hours. That makes recharge time important. A standard 220V attachment will take 8+ hours to recharge the battery. Some models come with a fast-charge option, requiring a three-phase outlet, that can do the job in an hour or two.

Several OEMs have unveiled prototypes of larger electric construction equipment, so it’s worth checking for announcements of production model rollouts. Komatsu is teaming up with Proterra, a leader in electric bus technology, to develop a full-sized electric excavator that uses its battery as a counterweight. Case and Deere are known to be testing prototypes of electric backhoes. 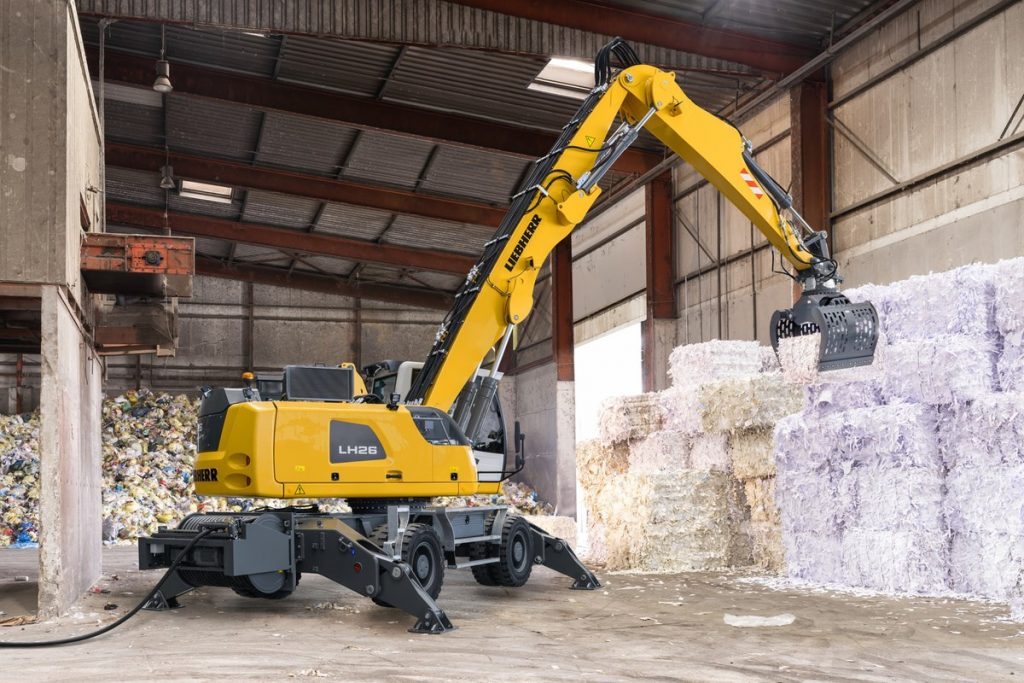 All-electric material handlers and cranes are powered by electricity rather than diesel fuel. Typically these machines are either stationary and hardwired into their power supply, or they’re attached to a tether cable that allows a limited range of travel. There are some models that have auxiliary battery packs to enable additional mobility around a larger job site.

Material handlers have become increasingly efficient, versatile and operator-friendly over the years, and electrification is part of the evolution. Much of this is driven by increasingly stringent particulate emissions regulations in California and in other countries.

Electric technology is extremely well-suited to stationary applications such as scrap and recycling operations. While an electric rig will carry an up-front cost premium of perhaps 20% over diesel, total cost of ownership is considerably lower thanks to significantly lower (50-70%) operating costs and up to 3X longer operating life. Not only is electricity cheaper than diesel, electric motors are also more efficient and reliable, and have fewer moving parts, resulting in far lower maintenance costs and less downtime. In addition, lower noise enables better communication with the ground and provides a safer operating environment, while zero emissions means a healthier workplace (especially in indoor settings).

Several companies manufacture electric cranes with all the same capabilities as diesel ones. Sennebogen and Liebherr both offer electric versions of most of their stationary machines and some tracked ones with cable tethers. E-Crane specializes in very large pedestal-mounted and gantry-mounted rigs. Builtrite and Sierra have their own lines of stationary electric material handlers, most of them designed for indoor use.